At a public hearing held this afternoon on the 2021 Hamilton County operating budget, HSC Executive Director Gina Marsh urged the Commissioners to invest in human services, an item that the county has not historically funded in its operating budget. HSC believes now is the time.

The need for human services has grown over the past two decades, especially in areas of the county outside of the City of Cincinnati. WCPO recently reported that from 2000 – 2019, the number of people living below the federal poverty line decreased by 3% within the City of Cincinnati but increased in the rest of Hamilton County by 74% during that same timeframe.

Additionally, between 2014 and 2017, 15 of the 33 “first suburb” communities had an eviction filing rate above the national average of 6%. Of those, 8 communities had eviction rates above 10% annually. This means for every 100 occupied renter units, there were over 10 households who were evicted from their homes.

As Hamilton County experiences better financial health, we believe now is the time for the County to commit funding toward supporting its greatest asset – its people.  One way the County can do this is by committing to fund a minimum percentage, such a 1.5% of the General Fund, toward human services each year.  Commissioners can then decide which service areas to fund based on the highest priority needs – for example housing, workforce supports, and food insecurity.

With a focused commitment on these human investments, we can help residents overcome difficult life challenges and create a healthy and vibrant community for everyone.

Human Services Chamber member agencies are partnering with the Move[...] 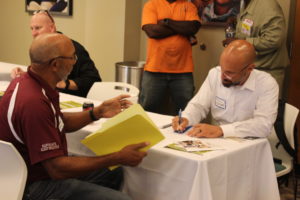 This week, HSC hosted a Meet the Buyers event at[...]

HSC is excited to announce that its members have elected[...]