The Human Services Chamber hosted a Welcome Reception and forum for the newly elected Mayor and City Council Members at the Center for Addiction Treatment.  HSC members had the opportunity to mix and mingle with the officials and hear from them on a variety of human services topics that are at the forefront of HSC’ s agenda this year.  The Mayor emphasized the importance of fairness and transparency in the way human services funding is allocated, and suggested that there is more to be done toward that cause in advance of the budget this year.  He stated that the amount of human services funding could reach 1.5% of the City’s budget this year if all of the agencies who received funding went through the same competitive process.  To the surprise of many in the room, including his colleagues, Vice Mayor Smitherman announced that he has drafted a charter amendment to guarantee that a minimum of 1.5% of the city budget goes to human services every year.  He also stated that he supports the bus levy, but only if the levy is high enough to ensure robust improvements.  Council Members Mann and Dennard stressed the need to identify new funding sources to invest in affordable housing and P.G. Sittenfeld shared his enthusiasm for fixing our ailing bus system.  Council Members Landsman and Pastor also attended.  This was an informative event in which HSC members got to hear from City leaders on many of the issues that concern those in the human services sector.  HSC looks forward to working with the Mayor and Council on many of these issues in the year ahead. 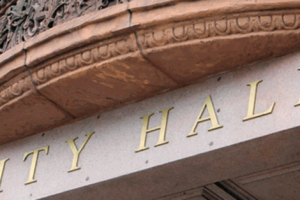 HSC members will convene at City Hall today to ask[...]

Mayor John Cranley has proposed a budget that allocates 1.2%[...]